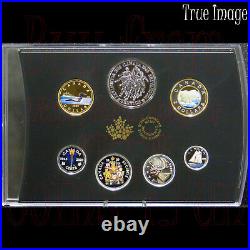 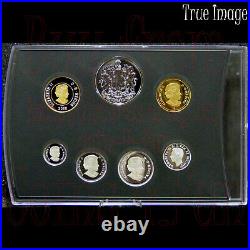 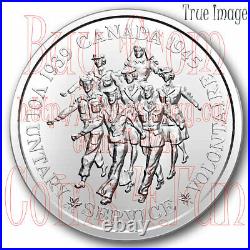 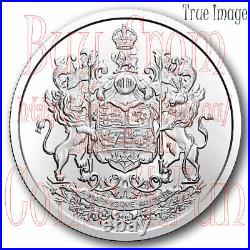 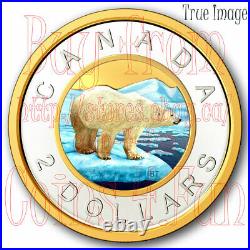 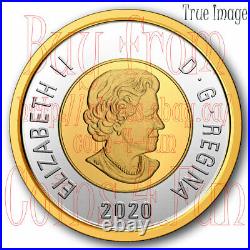 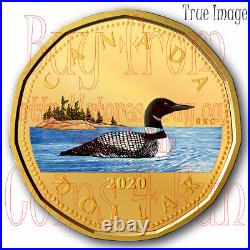 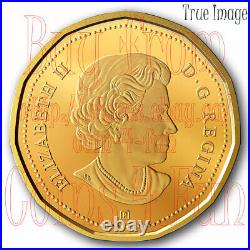 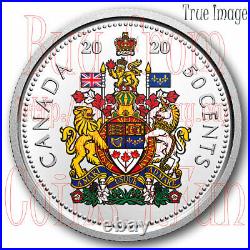 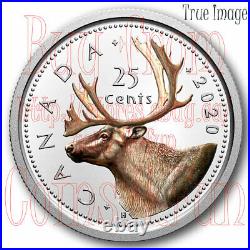 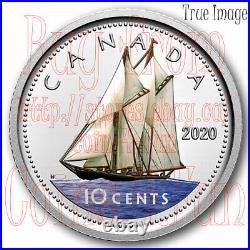 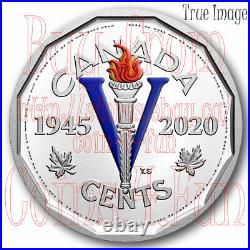 2020 – Canadian Circulation Collection – Pure Silver Coloured 6-Coin Set with Medallion. Now in its third year, our coin and medallion set is the only annual set to feature Canada’s circulation coin designs in colour and in 99.99% pure silver. You’ll find those classic designs in the 2020 edition but the 5-cent coin is an exclusive colourized tribute to Thomas Shingles’ Victory nickel. Shingles originally engraved the design on the medallion too: it’s a faithful reproduction of the Canadian Volunteer Service Medal, which was awarded to more than 650,000 Canadians in recognition of their voluntary service in the Second World War. This set perfectly embodies the nation’s spirit in 1945 and in 2020, as we honour those who contributed to the Allied victory 75 years ago. A must-have 2020 Canadian circulation 99.99% pure silver 6-coin set with medallion! OUR THIRD COLOURIZED COIN AND MEDALLION SET: Your set features Canada’s 2020 circulation coin designs in 99.99% pure silver and accented with colour! AN EXCLUSIVE: A “V” FOR “VICTORY” TAKES THE PLACE OF G. KRUGER-GRAY’S CLASSIC BEAVER DESIGN ON THE 5-CENT COIN: This is the only set in 2020 that includes a colour version of the Victory nickel issued to commemorate the 75th anniversary of V-E Day. ETCHED IN HISTORY: Both the Victory nickel and the Canadian Volunteer Service Medal were engraved by Thomas Shingles, former Master Engraver at the Royal Canadian Mint. A TRADITIONAL FINISH: The medallion in this set features a brilliant uncirculated finish that is true to the actual medal. PROOF FINISH: All six denominations come in their standard size. These coins have been struck at a lower speed than your typical circulation coins; the result is a stunning, mirror-like proof finish that plays up the colour. CANADA NOW AND THEN: This set is for history enthusiasts and collectors of Canadian coins that speak to our past and our present! The seven marching figures represent the Royal Canadian Navy, Women’s Royal Canadian Naval Service, 1st Canadian Parachute Battalion, Canadian Women’s Army Corps, Royal Canadian Air Force (RCAF), RCAF Women’s Division, and Royal Canadian Army Medical Corps. Around the rim is the inscription “1939 CANADA 1945 VOLUNTARY SERVICE VOLONTAIRE”. The reverse features the Arms of Canada, as seen on the original medal. About the Canadian Volunteer Service Medal With the creation of the Canadian Volunteer Service Medal (CVSM) in 1943, Canada became the first country in the Commonwealth to recognize voluntary service in the Second World War. The medal was crafted in. 925 silver and engraved by Master Engraver Thomas Shingles. The obverse by war artist Charles Fraser Comfort was based on photographs of seven marching members of Canada’s army, air force, navy and nursing service. At first, the medal was only awarded to members of Canada’s military forces and merchant navy who honourably completed 18 months total voluntary service from 3 September 1939 to 1 March 1947. Eligibility was later expanded to include members of the Royal Canadian Mounted Police, as well as various civilian and military support organizations. A total of 650,000 medals were awarded. The Royal Canadian Mint has struck decorations, medals and other awards since the early 1930s. Its medals branch is practically a mint within a mint: it has its own separate presses and an award-winning team of engravers and engineers dedicated to creating the highest quality medals. All the medals for the Vancouver 2010 Olympic and Paralympic Games were struck at our Ottawa facility on Sussex Drive. Some of Canada’s most prestigious national honours are also struck in the same facility. For the Victory nickel, Shingles prepared the matrix entirely by hand in fact, this was the first time master tooling was made in Canada. Packaging: Your set of Canadian coinage and medallion are safely enclosed in a leather-style book packaging that provides an elegant presentation for repeat viewings or permanent display. 99.99 % pure silver. Cathy Bursey-Sabourin (reverse), Charles Frasier Comfort (obverse). 99.99% pure silver with gold-plated inner core. (reverse), Susanna Blunt (obverse). 99.99% pure silver, gold plated. 99.99% pure silver. I do leave feedback for everyone. The item “2020 Canadian Classic Colourised Proof Pure Silver 6-Coin Set with Medallion” is in sale since Friday, September 25, 2020. This item is in the category “Coins & Paper Money\Coins\ Canada\Commemorative”. The seller is “coins.4.fun” and is located in Richmond Hill, Ontario. This item can be shipped worldwide. 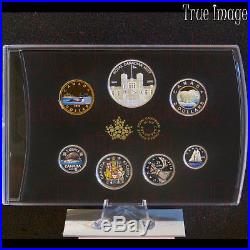 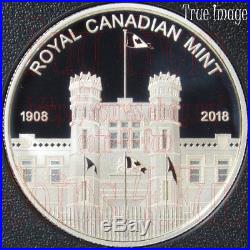 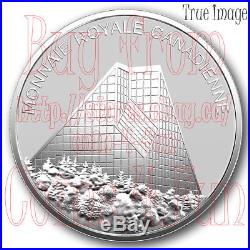 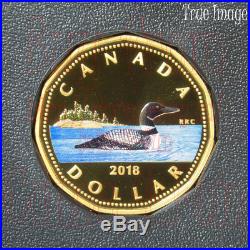 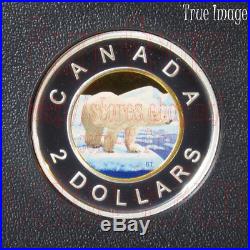 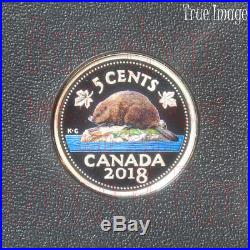 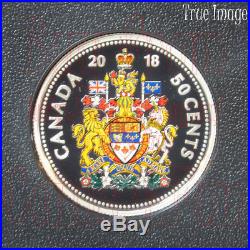 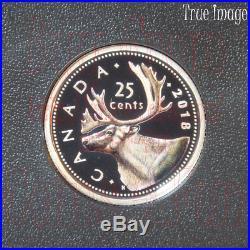 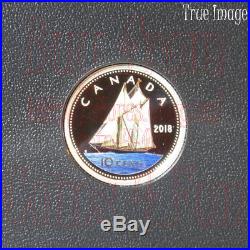 2018 – Canadian Circulation Collection – Pure Silver Coloured 6-Coin Set with Medallion. Canada’s circulation coins recount our unique history, stunning landscapes, and national pride. This story is intrinsically linked to the history of the Royal Canadian Mint itself. As the Mint celebrates its 110th anniversary, we’re releasing this first-of-its kind set, featuring full-colour versions of Canadian circulation coinage and a stunning commemorative medallion! A seriously must-have 2018 Canadian circulation 99.99% pure silver 6-coin set with medallion! A REALLY COOL FIRST! This is the first time Canada’s iconic circulation coin designs have been included in a colourised collectionat standard sizes! HAPPY 110-YEAR ANNIVERSARY TO THE ROYAL CANADIAN MINT! Your included medallion features detailed depictions of the Royal Canadian Mint buildings in Ottawa and Winnipeg, marking 110 years since the opening of Canada’s own mint in Ottawa! AND YOUR MEDALLION IS SPECIAL TOO! Your medallion features a special finish; proof on the reverse, reverse proof on the obverse! STUNNING MIRROR PROOF FINISH! Every 99.99% pure silver coin in your set features a stunning mirror proof finish, highlighting their colourful designs! The Royal Canadian Mint certifies all of its collector coin sets. In addition, each coin specification is clearly listed in your official certificate of authenticity. 99.99% PURE SILVER! Your coins AND medallion are crafted from 99.99% pure silver! LOW WORLDWIDE MINTAGE: Only 7,000 coin sets will be made available worldwide. GST/HST EXEMPT: Your 6-coin set is GST/HST exempt. Your medallion features designs by Kristin McPherson. Its reverse shows the turreted façade of the Ottawa branch of the Royal Canadian Mint, as viewed from beyond its wrought iron security fence, while the obverse features the iconic silhouette of the Winnipeg branch. 99.99% pure silver coin designs. Polar Bear: Canada’s two-dollar coin, launched in 1996, features a polar bear, one of the world’s largest terrestrial carnivores which can weigh up to 650 kilograms. It lives near the cold seas and frozen ice of Canada’s far-north. Common Loon: Launched in 1987, the reverse of the one-dollar coin represents a common loon swimming against the rugged backdrop of the Canadian Shield. The loon’s haunting calls are one the quintessential sound of the Canadian wilderness in summer. Canada’s Coat of Arms: The Canadian Coat of Arms, proclaimed in 1921 and modified in 1996, reminds Canadians of our diverse heritage. It features images from France (the fleur-de-lis), England (the three royal lions and rose), Scotland (a lion and thistle) and Ireland (the Irish harp and shamrock). Caribou: An enduring symbol of the Canadian north, the majestically-antlered caribou has remained a Canadian icon since first appearing on the twenty-five-cent piece in 1937. In 1921, Atlantic Canadians built one of the finest racing and fishing vessels in Canadian history, the. Beaver: The beaver is Canada’s national animal. Highly sought after for its rich fur in the 17th and 18th centuries, it was the mainstay of the colonial economy for centuries. Today, the beaver is revered as a symbol of hard work and perseverance. Starting in 1902, the Ottawa Mint building project suffered a few setbacks that delayed its opening several times. One such setback: the architects forgot to include a security fence in the design! The Mint’s dedicated circulation coin manufacturing facility, now located in Winnipeg, was originally slated for Ottawa. The Winnipeg mint opened in 1976. In 1931, the Royal Mint in Ottawa was transferred to the Canadian government, becoming the Royal Canadian Mint. The Mint began re-designing circulation coinage shortly thereafter. The Mint’s high-speed plant in Winnipeg strikes more than one billion circulation coins each year. Its presses can strike up to 750coins per second! Fine silver collector versions of Canada’s circulation coins are struck in Ottawa. Your set of Canadian coinage and medallion are safely enclosed in a leather-style book packaging that provides an elegant presentation time and time again, whether you’re proudly showcasing or repeatedly admiring this treasured addition to your collection! 99.99 % pure silver. Proof (reverse), reverse proof (obverse). Kristin McPherson (reverse and obverse). 99.99% pure silver with gold-plated inner core. (reverse), Susanna Blunt (obverse). 99.99% pure silver, gold plated. 99.99% pure silver. I do leave feedback for everyone. The item “2018 Canadian Classic Colourised Proof Pure Silver 6 Coins + Medallion Set” is in sale since Thursday, August 2, 2018. This item is in the category “Coins & Paper Money\Coins\ Canada\Commemorative”. The seller is “coins.4.fun” and is located in Richmond Hill, Ontario. This item can be shipped worldwide.