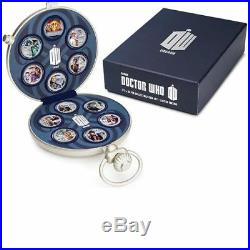 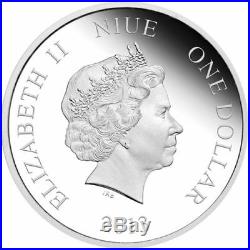 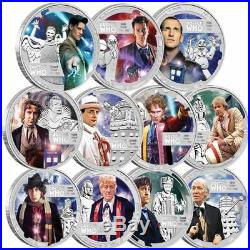 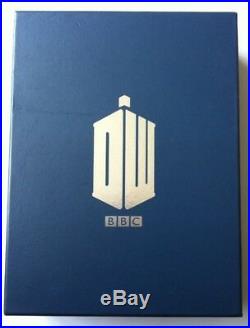 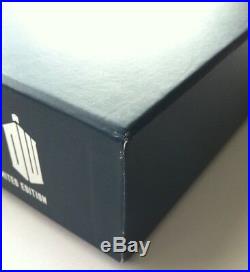 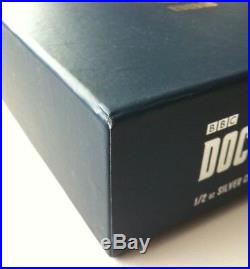 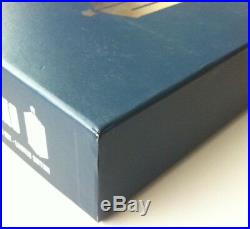 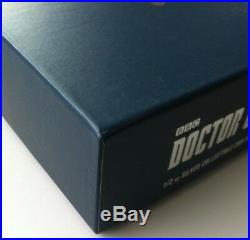 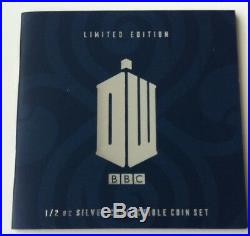 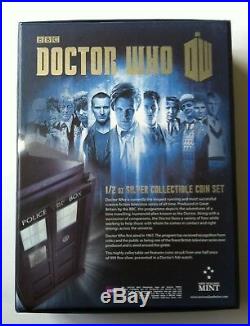 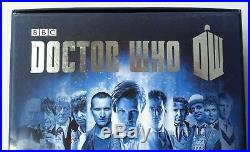 2013 Doctor Who 50th Anniversary 1/2oz Silver Proof 11 Coin Set. COIN AND CASE IN EXCELLENT CONDITION! CERTIFICATE IN VERY GOOD CONDITION! THE OUTER BOX HAVE VERY MINOR WEAR AND VERY SLIGHT DINT! THIS IS NORMAL GIVEN ITS AGE. PLEASE VIEW PHOTOS FOR MORE DETAILS! Produced by the BBC, Doctor Who is the world’s longest running sci-fi programme having captivated audiences of all ages since 1963. Since its debut, the programme has featured the adventures of a time travelling, humanoid alien known as the Doctor as he explores the universe in the TARDIS, his indestructible time machine that is bigger in the inside than the outside. Proof Quality 99.9% Pure Silver. Each coin is struck by The Perth Mint on behalf of New Zealand Mint from 1/2oz of 99.9% pure silver in proof quality. Eleven Iconic Doctor Reverse Designs. The reverse of each coin features a high quality colour reproduction of the Doctor in his various regenerations. Behind him is a likeness of his nemesis, sculpted on a vivid background surrounded by a border inspired by technology and time travel. The first ever Doctor was played by William Hartnell from 1963 until 1966. Sometimes doting, sometimes difficult, the First Doctor was both a loving father-figure and a fierce opponent. The reverse design also features the Doctor’s arch enemies, the evil Daleks, on the background. The Second Doctor was played by Patrick Troughton from 1966 until 1969. His playful, whimsical air disguised dark undercurrents and a sharp mind. The emotionless Cybermen are also represented alongside the Doctor on this design. In 1970 the Third Doctor, played by Jon Pertwee, was forced to begin his exile on Earth with a new face. The Third Doctor was confident, bold and brash, but with a soft paternal side reserved for those he cared about. The background of this coin’s reverse features the fellow renegade Time Lord, The Master. The Fourth Doctor was played by Tom Baker from 1974 until 1981 when he died saving the universe from the Master. This incarnation of the Doctor reassembled the Key to Time, tried to reason with Davros at the birth of the Daleks, and was invested as Lord President of the High Council of Time Lords. The scientist Davros, his arch enemy and creator of the deadly Daleks, is featured on this design. The Fifth Doctor was one of fascination and science, played by Peter Davison from 1981 until 1984. In this fifth body, the Doctor was reunited with his past selves to fight in the Death Zone on Gallifrey. A revengeful Omega, once a stellar engineer and High Council member on Gallifrey, is featured in this coin’s design. The Sixth Doctor, played by Colin Baker from 1984 to 1986, was an explosion of colours, words and emotions. Passionate and sometimes quick to anger, this was a Doctor with whom you would not want to make enemies. The reverse design also depicts a Cyber Controller in the background. Played by Sylvester McCoy from 1987 until 1996, the Seventh Doctor was both a spoon-playing clown and a master of deep dark secrets who toppled empires in a single night, entertained in the circus of the Gods of Ragnarok, and played chess with the ancient and evil Fenric. A Dalek is also represented in this coin’s design. After dying on the operating table the Doctor regenerated into his eighth form played by Paul McGann in 1996. Mercurial, frenzied and prone to bouts of amnesia, he teamed up with Grace Holloway to save the world from being pulled inside-out by The Master’s hijacking of the TARDIS. This coin’s reverse depicts the Doctor’s’best enemy’ The Master, in a stolen human body, in the background. The sole survivor of the Last Great Time War, scarred by the terrible things he’d seen and done, the Ninth Doctor was an intense and emotional incarnation played by Christopher Eccleston in 2005. The background features a ruthless Slitheen. The Tenth Doctor, played by David Tennant from 2005 until 2010, woke on Christmas Day in his new form. Reeling from his confrontation with the Time Lords and fatally dosed with radiation, the Tenth Doctor’s song ended, as his violent regeneration burned the TARDIS and sent it crashing through space. A possessed Ood is also featured in this coin’s reverse design. Since 2010, Matt Smith has played the Eleventh Doctor, an excited explorer of the universe, with a keen intelligence that means he often notices what everyone else has missed. A deadly and powerful Weeping Angel is featured in the background. Innovative’Fob Watch’ Presentation Packaging. Each set is packaged in a special presentation case in the shape of the Doctors fob watch. The fob watch opens to display the 1/2oz coins and a numbered Certificate of Authenticity. The eleven-coin set will initially comprise eleven silver coins. A twelfth recess is filled by a coloured token featuring a printed collage of all the Doctors. Issued as legal tender of the South Pacific island nation of Niue, the obverse of each coin features the Ian Rank-Broadley effigy of Her Majesty Queen Elizabeth II, the 2013 year-date and the monetary denomination. Only 3,000 of the Doctor Who1/2oz Silver Proof Eleven-Coin Sets will be released worldwide. Each coin has a maximum mintage of 4,000. Under official license of BBC Australia & New Zealand, the 50th Anniversary of Doctor Who 1/2oz Silver Proof Eleven-Coin Set is issued by New Zealand Mint. Silver Content (Troy oz). Minimum Gross Weight (g). WE TAKE PRIDE IN PACKING OUR PRODUCTS AND GUARANTEE THAT THEY ARE RECEIVED IN EXCELLENT CONDITION! WE ARE YOUR FRIENDS. Please view our other items on E b a y! We Are Happy to Post Out Via Reg istered Post within 24HRS of Receiving Cleared Funds. The item “2013 Doctor Who 50th Anniversary 1/2oz Silver Proof 11 Coin Set” is in sale since Tuesday, March 13, 2018. This item is in the category “Coins\Coins\Australian\Decimal”. The seller is “blue-chip-coins” and is located in Melbourne, Victoria. This item can be shipped worldwide.