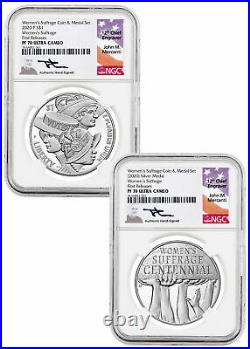 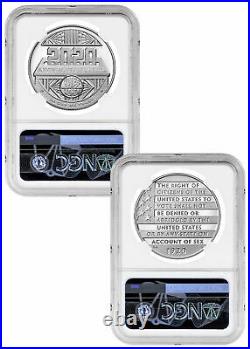 MCM Picks: Memorial Day. 2-Piece Set – 2020-P Women’s Suffrage 100th Anniversary Commemorative Silver Dollar and Medal Set NGC PF70 FR Mercanti Signed Label SKU62012. Why order this 2-Piece 2020-P Commemorative Women’s Suffrage 100th Anniversary Silver Dollar and Medal Set? 1920 was one of the most significant years in American history because of the ratification of the 19th Amendment. The amendment granted women the right to vote and, in doing so, made the promise of America available to all. The fight for rights for women continues to this day, but the ratification was a turning point in the movement. The US Mint marks the 100th anniversary of the amendment with this two piece set. Just 10,000 of these sets were issued. Both coins were struck at the Philadelphia Mint from 26.73 g of. 999 fine silver, but only the coin has a mint mark. Moving Women’s Suffrage Designs. The dollar features designs by Christina Hess that were sculpted by Phebe Hemphill. On the obverse are three women. Each one wears a hat that represents a different decade of the women’s suffrage movement. The last of the three has a button that bears an inscription of the year of ratification, 1920. “2020” drops into a ballot box on the reverse. The box is decorated in an art deco style typical of the era in which ratification was passed. Inscriptions on the box include the name of the issuing country, “UNITED STATES OF AMERICA, ” the national motto, “IN GOD WE TRUST, ” and VOTES FOR WOMEN. The medal’s obverse features women’s hands holding up a foundation stone. A young girl’s hand reaches up to join them. “WOMEN”S SUFFRAGE is inscribed on the stone. The reverse features the words of the 19th Amendment against a backdrop of the American flag. The date, “1920, ” is inscribed below the text of the amendment. Flawless PF70 FR with Mercanti Signed Label. Both of the pieces in this set earned Proof 70 grades from the experts at Numismatic Guaranty Corporation (NGC). That grade is given only to coins that appear perfect under 5x magnification. NGC also certified both pieces First Releases, which means that they were submitted for grading no more than 30 days after their initial release from the mint. This information comes provided on labels that were hand signed by former US Mint Chief Engraver John Mercanti. Add this Commemorative 2-Piece 2020-P Women’s Suffrage 100th Anniversary Silver Dollar and Medal Set to your collection today. Specifications for this 2-Piece Set – 2020-P Women’s Suffrage 100th Anniversary Commemorative Silver Dollar and Medal Set NGC PF70 FR Mercanti Signed Label SKU62012. United States Legal Tender. We cannot make any price adjustments after the sale is complete. Product Photo Policy: MCM attempts to display product images shown on the site as accurately as possible. We take all of our photos in house and due to reflections on the mirrored or proof surfaces of a coin there may appear to be’black’ when there is not. If a coin has a color on it at all it will be described as’colorized’ in the description or title. Due to the large inventory we sell, we use stock photos. Serial numbers will vary from the image shown unless specifically stated in the product listing that the item pictured is the item you will receive. INTERNATIONAL ORDERS POLICY: We are accepting international orders from select countries. These charges are the customer’s responsibility. However, we cannot guarantee this due to the volume of orders we process each day. Beyond the 30-day return period, Company is under no obligation to accept return of any product, but may in its discretion do so pursuant to this policy, for up to one year from the invoice date. ModernCoinMart (MCM) was launched in 2004 and quickly set the standards for online sales of bullion, US coins and world coins. Join over 100,000 loyal customers and feel confident purchasing from a company that’s spent a decade building a solid and stellar reputation trusted and recognized around the world. That’s the MCM way. View more great items. 2020 P Women’s Suffrage 100th Commemorative Silver Dollar PCGS MS69 FS. 2 Pc 2020 P Women’s Suffrage Commemorative Silver Dollar & Medal Set. 2 Pc 2020 P Women’s Suffrage 100th Silver Dollar & Medal Set NGC PF70 FR. 2020 P Women’s Suffrage 100th Commemorative Silver Dollar PCGS MS70 FS. This listing is currently undergoing maintenance, we apologise for any inconvenience caused. The item “2Pc 2020P Women’s Suffrage Silver Dollar &Medal Set NGC PF70 FR Mercanti Signed” is in sale since Tuesday, August 18, 2020. This item is in the category “Coins & Paper Money\Coins\ US\Commemorative\Modern Silver/Clad (1982-Now)”. The seller is “mcm” and is located in Sarasota, Florida. This item can be shipped worldwide.