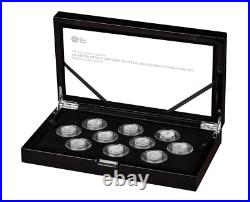 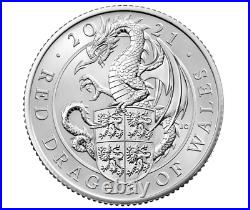 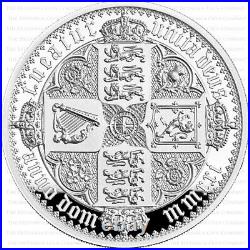 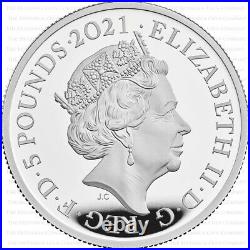 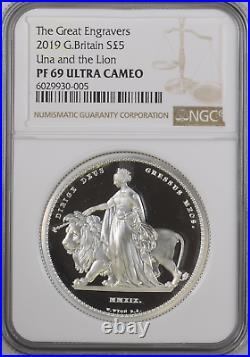 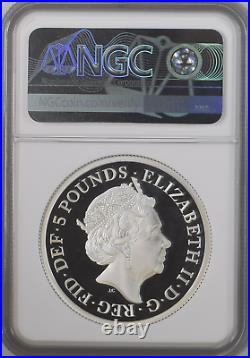 2019 Royal Mint Una and the Lion Silver Proof Two Ounce: NGC PF69. What is this magical coin? Besides the silver coin, a gold version was also struck. Originally, Una and the Lion was a gold five-pound coin minted in 1839. William Wyon created the coin entirely by hand and the reverse was based on the characters Una and the Lion but Wyon cast a young Queen Victoria as Lady Una, walking a lion which epitomised the strength of the British Empire at the time. A design which featured a living monarch as a fictional character was bold and controversial at the time, but the execution created one of the most beautiful coins ever produced. The 1839 coin was probably intended only for collectors so just a few hundred were minted, and even that small number carried several variations. The last time the coin was struck was back in the 1880’s and the Royal Mint decided to stick with authenticity and created the 2019 silver 2oz Una and the Lion using William Wyon’s original die. The die was remastered to remove any historical blemishes and the proof finish itself was adjusted so that the 2019 coin image would be an exact counterpart of the original 1839 masterpiece. The result is stunning. The Reverse (back, tails) shows a young Queen Victoria (as Una) holding a sceptre and walking with a lion. The legend is DIRIGE DEUS GRESSUS MEOS (May God direct my steps). Below is the date in Roman Numerals as MMXIX (2019), and below that the engravers name: W. The 2019 silver 2oz Una and the Lion Obverse (front, heads) shows a portrait of Her Majesty Queen Elizabeth II. It was designed by Jody Clark. The legend is ELIZABETH II DG REG FD (Elizabeth II by the Grace of God Queen, Defender of the Faith) and the denomination 5 POUNDS. So Who was Una? Lady Una is a character from the epic poem’The Faerie Queene’ by Edmund Spenser, written around 1590 during the reign of Elizabeth I. The poem is one of the longest in English literature and is considered as an allegorical work. In the poem, Una is the beautiful daughter of the King and Queen who were imprisoned by a dragon. Una sets off to free them but encounters a fierce lion who intends to kill her. The lion is so enchanted by Una’s beauty and innocence that he decides to help her in her quest and becomes her guardian. The poem inspired William Wyon who had already worked with Victoria when she was just 15 years old and he had become a personal favourite of the young princess. William Wyon and the Wyon Family. William Wyon RA was born in Birmingham in 1795 and was the official chief engraver at the Royal Mint from 1828 until his death in 1851. William designed the second and third portraits of George IV, the 1830 effigy of William IV and the’Young Head’ portrait of Queen Victoria used on many coins between 1838 to 1887. William was part of maybe the most famous family in British coin history. His grandfather, uncles, brothers and other members were prominent die engravers and designers, several actually working at the Royal Mint and two becoming Chief Engraver at the Royal Mint. William’s son was Leonard Charles Wyon, who engraved many of the Victoria Golden Jubilee coins in 1887. The Monarch: Queen Elizabeth II. Queen Elizabeth II is the current and longest reigning British monarch ever. Born as Princess Elizabeth Alexandra Mary of York on 21 April 1926, the first child of George, Duke of York, and Elizabeth Bowes-Lyon, Duchess of York. Princess Elizabeth’s grandfather was King George V and when he died in January 1936 it was Elizabeth’s uncle who ascended the throne as Edward VIII. Edward famously abdicated in December 1936 and it was left to Elizabeth’s Father George to reluctantly become King George VI. This instantly promoted Elizabeth to Heir Presumptive. On 6 February 1952 she became Queen Elizabeth II in the House of Windsor. Her Coronation was on 2 June 1953. Her Majesty’s Portrait is on the obverse of 2019 silver 2oz Una and the Lion coin. Monarch: Elizabeth II (1952- present). The Britannia Coin Company of Royal Wootton Bassett is part of Gold Traders UK Ltd. We’ve been trading since 2008 and pride ourselves in offering market leading prices for all types of coins from Royal Mint proof & collectable sets to hammered & ancient coins. Gold Traders prides itself on honesty, integrity and ensuring the best value for customers, which has earned the company many favourable testimonials and positive press reviews too. The item “2019 Royal Mint Great Engravers Una and the Lion Silver Proof Two Ounce 2oz PF69″ is in sale since Wednesday, June 2, 2021. This item is in the category “Coins\Coins\British\Proof Sets/Coins\2000s”. The seller is “britanniacoinco” and is located in Swindon. This item can be shipped worldwide. 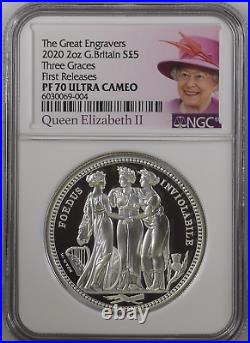 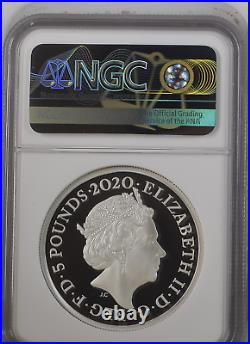 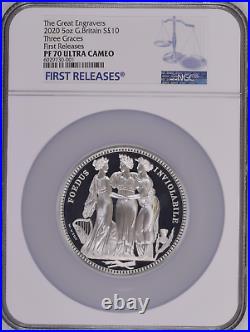 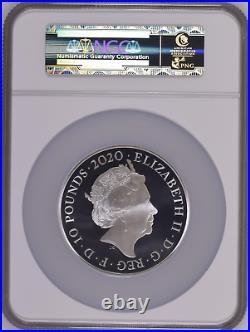 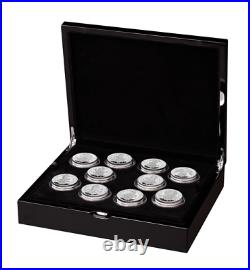 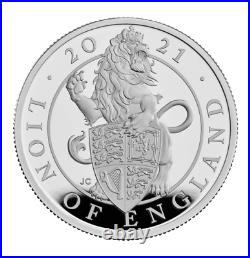 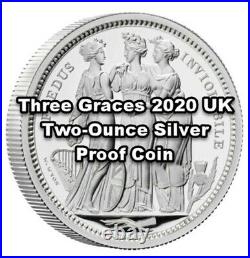 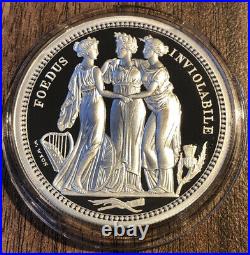 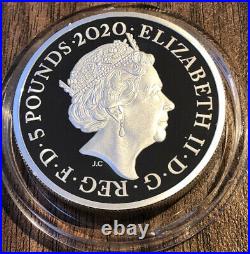 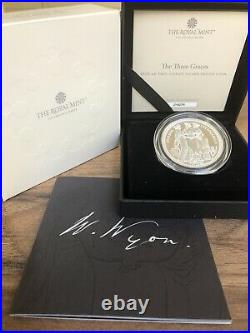 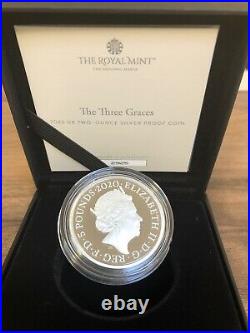 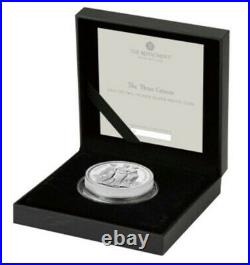 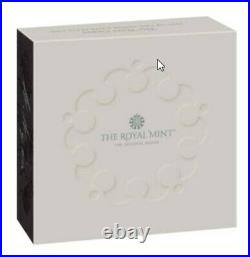 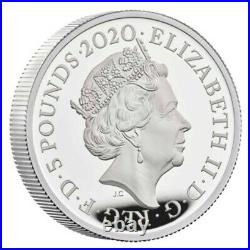 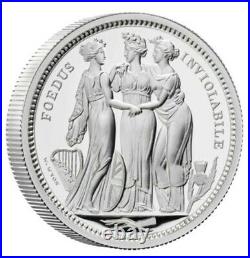 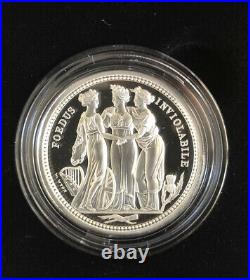 THE GREAT ENGRAVERS THREE GRACES 2020 2OZ SILVER PROOF COIN THE ROYAL MINT. Three Graces 2020UK Two-Ounce Silver Proof Coin. The item “2020 UK Royal Mint The Three Graces Two-Ounce (2oz) Silver Proof £5 Coin” is in sale since Thursday, February 25, 2021. This item is in the category “Coins\Coins\British\Proof Sets/Coins\2000s”. The seller is “pashi_48″ and is located in Brighton. This item can be shipped worldwide. 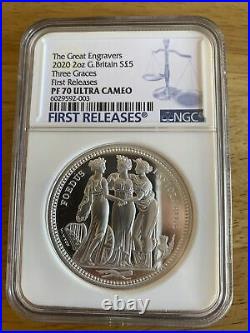 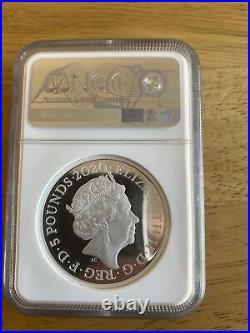 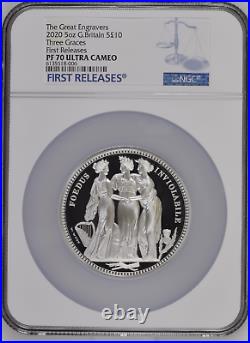 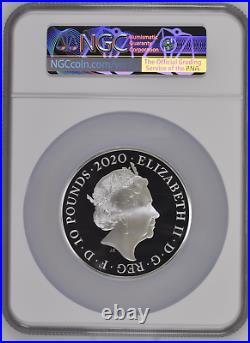 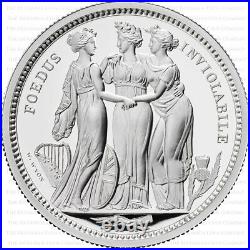 2020 The Three Graces by William Wyon – 1Kg Silver Proof : Royal Mint Great Engravers Series. Only 125 pieces have been issued by the Royal Mint. The 1Kg Silver Proof Three Graces coin brings William Wyon’s 1817 masterpiece to a modern audience of collectors and investors. But why has the Royal Mint minted this iconic design again? And what makes it so special? The 1Kg Silver Proof Three Graces is part of The Royal Mint’s highly sought-after Great Engravers series. Launched in 2019, Great Engravers celebrates the greatest artists to have worked on British coinage through reissues of their most memorable works. A new design is released annually. The inaugural issue in the Great Engravers series, 2019’s Una and the Lion. Also featured an iconic reverse created by William Wyon. First struck in 1839 during the early years of Queen Victoria’s reign, Una and the Lion. Has long been regarded as among the most beautiful coins in the world. Like its predecessor, 2020’s addition to the Great Engravers series the Three Graces is a timeless nineteenth-century design. Cutting-edge, twenty-first century technology comes together with the enduring skills of the Royal Mint’s master craftsmen to make a striking and collectable coin. The 1 KG Silver Proof Three Graces coin revitalises a design first struck in 1817. The reverse features three female figures, representing Ireland, England and Scotland. The implements at their feet are symbols of their homelands: a harp, a thistle and a shield bearing St George’s cross. This charming engraving is an idealised representation of the relationship between the three nations, which in the nineteenth-century were unified as the United Kingdom of Great Britain and Ireland. Tiny roses, shamrocks and thistles in the women’s crowns cement the women’s identities. Below the figures of the Three Graces are two additional objects: a rudder and a palm frond. The palm indicates both victory and peace and the rudder reminds us of British naval supremacy: both points of immense national pride in the years following British victory in the Napoleonic Wars. The original Three Graces is the work of renown Royal Mint engraver William Wyon (1795 1851). Born into a family of engravers, he demonstrated his talent from a young age, winning Royal Academy competitions and attracting considerable attention on the London Art scene. In 1816, William Wyon was appointed to the post of Second Engraver to the Royal Mint, working under his cousin, Thomas Wyon Junior, then Chief Engraver. Though busy with official commissions, William engraved the Three Graces in his spare time, minting it as a pattern coin in 1817. William Wyon would himself be appointed Chief Engraver to the Royal Mint in 1828. He is remembered for his impressive output including the’Young Head’ of Queen Victoria. Much loved by the monarch and the gorgeous Una and the Lion. The Three Graces is an early masterpiece. The Three Graces shows the influence of a trend that dominated European visual and decorative arts in the early nineteenth century: Neoclassicism. Influenced by the culture, stories and style of Ancient Greece and Rome, proponents of Neoclassicism favoured simple, symmetrical, clean-lined designs. Neoclassicism had an impact on everything from fashion to architecture. Famous proponents included painters Jacques-Louis David and Jean Auguste Dominique Ingres and the sculptor, Antonio Canova. The Three Graces coin has similarities to a sculpture by the same name, crafted by Canova. Depicting the three charities. Of ancient mythology Euphrosyne, Aglaea and Thalia Canova’s work tackled a subject that was popular at the time. Wyon’s 1817 coin evokes the same Greek stories but cleverly uses the trio to symbolise England, Scotland and Ireland too. The original nineteenth-century Three Graces coin featured on its obverse a remarkable, high-relief effigy of George III. Quite different from that which appeared on contemporary circulating coinage. This design, also the work of William Wyon expressed his dislike of the portrait then in use. For its reissue as part of the Great Engravers series, the Three Graces design has been paired with the current coin portrait of Elizabeth II. The effigy, the fifth such to appear on British coins, is the work of Jody Clark. A Royal Mint designer like William Wyon. Created using computer-aided design software, without an in-person sitting, Clark’s portrait is the product of twenty-first century technology. Matched with William Wyon’s hand engraved Three Graces design, the 2020 Great Engravers reissue charts 200 years of Royal Mint excellence. Original nineteenth-century strikings of the Three Graces were pattern coins. Only around 50 of which survive. When they come to the market they achieve significant prices. The Royal Mint 2020 Great Engravers reissue of the Three Graces will allow more collectors to own this piece of coinage history. Available in a range of denominations and metals, there is a 2020 Three Graces coin or set for every budget though all are available in limited numbers. The 1Kg Silver Proof Three Graces coin represents a move into heavier, higher-value silver coinage for The Royal Mint. The larger and weightier 1 KG Silver Proof Three Graces is a new way to enjoy and invest in this series. Monarch: Elizabeth II (1952- present). The Britannia Coin Company of Royal Wootton Bassett is part of Gold Traders UK Ltd. We’ve been trading since 2008 and pride ourselves in offering market leading prices for all types of coins from Royal Mint proof & collectable sets to hammered & ancient coins. Gold Traders prides itself on honesty, integrity and ensuring the best value for customers, which has earned the company many favourable testimonials and positive press reviews too. The item “2020 Royal Mint Three Graces Silver Proof One Kilo 1kg Only 125 Minted” is in sale since Wednesday, April 7, 2021. This item is in the category “Coins\Coins\British\Proof Sets/Coins\2000s”. The seller is “britanniacoinco” and is located in Swindon. This item can be shipped worldwide.