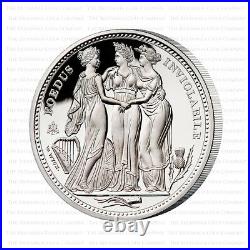 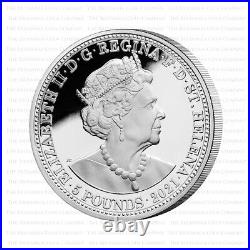 2021 Saint Helena Three Graces 5 Ounce Silver Proof. Mintage of only 300! This new release from The East India Company is your chance to own William Wyon’s masterpiece of coinage design in five ounces of. William Wyon: A Great Engraver. The original Three Graces was the work of renown Royal Mint engraver William Wyon (1795- 1851). He is remembered for his impressive output, including the’Young Head’ of Queen Victoria – much loved by the monarch – and the gorgeous Una and the Lion which has recently been reproduced as part of The Royal Mint’s Great Engraver’s series. Wyon minted the Three Graces design as a pattern coin in 1817, crafting the now legendary coin in his spare time between official commissions. It represents an early work of a rightfully acclaimed artist. A Classically Inspired Design. The reverse of the original pattern coin, reproduced here using time-tested techniques, shows three female figures, representing Ireland, England and Scotland. The implements at their feet are symbols of their homelands: a harp, a thistle and a shield bearing St George’s cross. This charming engraving is an idealised representation of the relationship between the three nations. William Wyon was inspired by the Neoclassical trend in decorative arts, garbing his Three Graces in classical dress, evoking by this the three charities of ancient Greek mythology: Euphrosyne, Aglaea and Thalia. The original Three Graces coin held an effigy of George III on its obverse. On this 2021 silver issue, this is replaced with a portrait of Her Majesty the Queen by Jody Clark. This is different to the bust by the same artist that has appeared on circulating coinage since 2015 but is similarly regal. The legend, around the crowned head reads’ELIZABETH II· D· G· REGINA· F· D· ST. HELENA’ with the date and denomination below:’5 POUNDS · 2021′. The East India Company. Founded to explore the mysteries of the east, The East India Company is a byword for the Age of Sail and Empire. Since 2012 The East India Company has been minting coins in partnership with the Issuing Authority of Saint Helena and with the Royal Approval of Queen Elizabeth II. Struck in extremely limited numbers and to an impeccable standard, coins from The East India Company often feature reproductions of sought-after heritage designs and the 2021 St Helena Three Graces 5 Ounce Silver Proof is no different in this respect. You will be able to recognise a Saint Helena 2021 Three Graces by the unique’EIC’ mint mark added by The East India Company to the reverse. This is found just above the harp next to the leftmost figure. This issue is the first in The East India Company’s new Masterpiece Collection: celebrating the best of historic coinage design. We are keenly awaiting future additions to this exciting new series, though here at The Britannia Coin Company we can’t think of a better choice to start with than the Three Graces. The Saint Helena 2021 Three Graces collection offers William Wyon’s elegant design in silver and gold proof with the Five Ounce Silver Poof edition among the heaviest and scarcest. Only 300 have been minted. Five Ounces of Fine Silver. The 2021 St Helena Three Graces 5 Ounce Silver Proof is struck on five ounces (that’s 155.5 grams) of. 999 fine silver and has a diameter of 65 millimetres. There is no better way to appreciate an engraving like the Three Graces than in finest Silver Proof. The techniques used to produce proof coins ensure that the fine detail of this master-work is reproduced for you to enjoy. Your coin will arrive encapsulated in its original bespoke packaging from The East India Company with an information booklet and a numbered certificate of authenticity. Monarch: Elizabeth II (1952- present). The Britannia Coin Company of Royal Wootton Bassett is part of Gold Traders UK Ltd. We’ve been trading since 2008 and pride ourselves in offering market leading prices for all types of coins from Royal Mint proof & collectable sets to hammered & ancient coins. Gold Traders prides itself on honesty, integrity and ensuring the best value for customers, which has earned the company many favourable testimonials and positive press reviews too. The item “2021 St Helena The Three Graces Silver Proof Five Ounce 5oz Only 300 Minted” is in sale since Thursday, August 5, 2021. This item is in the category “Coins\Coins\World\Asia”. The seller is “britanniacoinco” and is located in Swindon. This item can be shipped worldwide.