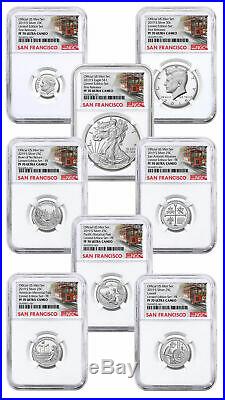 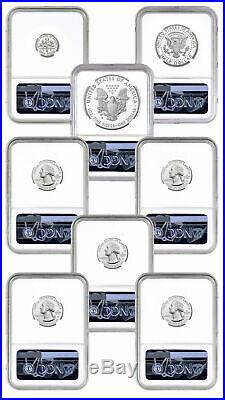 8-Coin Set – 2019-S U. Limited Edition Silver Proof Coins Set NGC PF70 UC FR Trolley Label PRESALE SKU59514. S Mint’s annual Limited Edition Silver Proof Set gives collectors the opportunity to own the designs of most of America’s circulated coinage in. The set is perfect for those who appreciate not just bullion and collector coin designs but also the designs of the coins that are used in everyday commerce. Each piece in this set bears the San Francisco Mint’s “S” mint mark. The set consists of an American Silver Eagle (1 oz), a Kennedy Half Dollar, (12.685 g), a Roosevelt Dime (2.537 g), and each of the five 2019 America the Beautiful Quarters (6.343 g each). Exquisite 2019 America the Beautiful Quarters Designs. Three of the coins in the set, the Roosevelt Dime, the Kennedy Half Dollar, and the America Silver Eagle, feature their traditional designs. Left-side portraits of the Presidents for which they are named appear on the obverse of the dime and half dollar, while Adolph Weinman’s Walking Liberty serves as the Silver Eagle’s obverse image. The dime has a torch flanked by two branches on the reverse. The half dollar and Silver Eagle both have adaptations of important seals on the reverse, the presidential seal and the Great Seal of the United States, respectively. John Flanagan’s portrait of President George Washington appears on the obverse of all five quarters, just as it has with other American quarters since 1932. The reverse designs are the 2019 America the Beautiful editions. The coins for Massachusetts and Texas honor the Lowell mill girls, who played important roles in the Industrial Revolution, and the San Antonio Missions, which laid the foundation for the modern city. The Northern Mariana Islands and Guam coins pay homage to those who served in the Pacific Theater during World War II with designs from American Memorial Park and War in the Pacific National Historical Park, respectively. The fifth quarter features a man in his boat enjoying the scenery and rapids of Frank Church River of No Return Wilderness. Perfect PF70 UC FR with Trolley Labels. Each of the eight coins in this set earned Numismatic Guaranty Corporation’s (NGC’s) highest grade, Proof 70. That grade is only given to coins that appear perfect under 5x magnification. The coins also earned Ultra Cameo certification, which means that their heavily frosted devices and deeply mirrored fields contrast sharply. Finally, they were certified as First Releases, a designation given to coins that were submitted for grading no more than a month after they were released from the mint. In a nod to the city in which this set was struck, a San Francisco trolley car features on each of the labels. Order this 8-Coin 2019-S U. Silver Proof Limited Edition Set now. Specifications for this 8-Coin Set – 2019-S U. We cannot make any price adjustments after the sale is complete. Product Photo Policy: MCM attempts to display product images shown on the site as accurately as possible. We take all of our photos in house and due to reflections on the mirrored or proof surfaces of a coin there may appear to be’black’ when there is not. If a coin has a color on it at all it will be described as’colorized’ in the description or title. Due to the large inventory we sell, we use stock photos. Serial numbers will vary from the image shown unless specifically stated in the product listing that the item pictured is the item you will receive. INTERNATIONAL ORDERS POLICY: We are accepting international orders from select countries. These charges are the customer’s responsibility. However, we cannot guarantee this due to the volume of orders we process each day. Beyond the 30-day return period, Company is under no obligation to accept return of any product, but may in its discretion do so pursuant to this policy, for up to one year from the invoice date. ModernCoinMart (MCM) was launched in 2004 and quickly set the standards for online sales of bullion, US coins and world coins. Join over 100,000 loyal customers and feel confident purchasing from a company that’s spent a decade building a solid and stellar reputation trusted and recognized around the world. That’s the MCM way. View more great items. This listing is currently undergoing maintenance, we apologise for any inconvenience caused. The item “8 Coin 2019S US Limited Edition Silver NGC PF70 UC FR Trolley PRESALE SKU59514″ is in sale since Thursday, October 17, 2019. This item is in the category “Coins & Paper Money\Coins\ US\Proof Sets”. The seller is “mcm” and is located in Sarasota, Florida. This item can be shipped worldwide.